Home › Blog › How Do I Know If The Ants Around My South Carolina Property Are Dangerous?

How Do I Know If The Ants Around My South Carolina Property Are Dangerous? 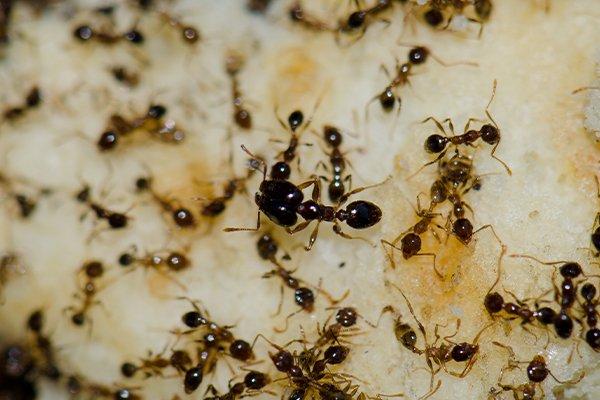 When you think of dangerous insects, ants probably don’t enter your mind. For the most part, you’re right in not thinking of them. Ants are tiny. Most species don’t bite. And, as long as you keep to yourself, they’ll keep to themselves as well.

However, ant infestations in South Carolina may be more likely than you think. Even if ants won’t attack you, they could be harboring dangerous pathogens or cause damage to your household. Let’s investigate the different types of ants in South Carolina and the reasons why homeowners should worry about ants in the house.

Most ants share the same general characteristics. An ant’s body has three segments that are pinched where each segment connects, six legs protruding off the middle segment (the thorax), two short antennae, and two short pincers near the mouth.

There are thousands of ant species around the world, and dozens alone in our South Carolina backyards. While most ants won’t cause trouble, a few ant species prefer your pantry as much as they prefer the outdoors. These ants are nuisance pests, meaning they’re annoying to deal with. But that doesn’t necessarily mean they’re not dangerous. These ants include:

These ants aren’t the type to attack or damage your home, so what makes them dangerous? They can carry a whole host of diseases. Bacterial pathogens such as streptococcus, staphylococcus, E. coli, salmonella, shigella, and clostridium are just some of the diseases that ants can transmit where they walk. If ants make it to your food supply or even walk on top of your hand soap or towels, who knows what diseases they’re transmitting.

As if awful diseases aren’t bad enough, there are two ant species that can wreak havoc on your home and family: fire ants and carpenter ants.

Fire ants grow to between 2-6 mm in length and have reddish-brown bodies. In addition to their fiery color, fire ants get their name from the burning stings they leave on your skin. Whether you get close to their nest or are simply existing, fire ants are aggressive fighters and will attack anything in their way. Fire ant stings can last for over a week, and in serious cases, they can cause nausea, vomiting, and anaphylactic shock.

Fire ants will sting repeatedly, and prolonged exposure can weaken your resilience and cause worsening allergic reactions.

By contrast, Carpenter ants don’t attack you, they attack your home. These ants grow to around 12 mm in length, have shiny black bodies, and create their nests in moist or decaying wood. If you see them around your house, they’re probably eating through your home’s foundation, weakening its structures, and causing house damage.

This guide should help you figure out what kind of ants you’re dealing with. But whether you have nuisance pests or dangerous ants, the truth doesn’t change: ants can’t stay in your household. If you’re having ant troubles, reach out to South Carolina’s pest experts at The Original Bugman Pest Elimination Inc., and we’ll secure your home from pests for good.

I have been using Bugman Pest Elimination for years. Not only do they do an excellent job of controlling pests, they are a family-oriented business. It gives it a personal touch, and means a lot, when you walk into a business and they know you and call you by name. That's how it is at Bugman. I highly recommend them.